,
• capacity of a data block (data issued in the active source state),

Since none of the parameters

are known, neither of the two Equations 2.1 and 2.2 can be solved individually. They can therefore be combined to allow one of the unknown parameters to be obtained, for example the duration of the inactivity period, knowing that

Equation 2.2 (or the same relationship

With an alternative approach, it is possible to refer only to the average traffic to obtain

, considering that the source issues L bytes in a time

at the average rate

, from which we obtain

Exercise 2.4.
Draw the traffic profile of a periodic ON-OFF source characterized by the following parameters:
• ratio between duration of activity and inactivity periods,

,
• time interval between two consecutive source transitions from the ON state to the OFF state,

,
• total amount of data issued in an interval of

The ratio R allows the burstiness factor to be derived

and hence the duration of the activity and inactivity periods

The average rate is immediately derived as

, which gives the peak rate

. The resulting traffic profile is therefore shown in Figure E2.2.


Exercise 2.7.
Consider a one-way ring network consisting of 4 nodes X, Y, Z, W, connected in series. The X-Y, Y-Z, Z-W and W-X connections between adjacent nodes have a capacity C bit/s. Assuming that each node receives traffic from a CBR source and that all sources offer traffic with the same peak rate P, determine the maximum throughput

that characterizes this network and the maximum rate Pmax that does not cause traffic losses.

The amount of traffic successfully transported by the network depends on the traffic relations that are offered. The two extreme cases are those in which the traffic offered in each node is directed to the first downstream node or to the last downstream node. In the first case, the traffic relations offered are X-Y, Y-Z, Z-W, W-X and each link supports only one of these flows. So the maximum throughput value that is achieved is

. In the second case the traffic relations are X-W, Y-X, Z-Y, W-Z and therefore each link supports three of these flows, that is, all those that do not originate and terminate on the two ends of the link itself. It follows that the intensity of each flow cannot exceed one third of the connection capacity and therefore


Exercise 2.11.
A source A generates a flow of IUs obtained by encoding a voice signal CBR at a peak rate

by silence suppression. For simplicity, it is assumed that silence pauses (of constant duration

) and each silence pause involves the removal of

from the data stream. Source A therefore behaves as a periodic VBR ON-OFF source with burstiness factor BA = 0.375. The source is connected by means of a link of negligible length to a packet transmission node X. The IUs received by A, after a processing delay equal to 2/3 of

, are retransmitted by X as packets to destination B without adding any overhead and without any queueing delay. Node X transmits at peak rate

. B is a space module in orbit around the Moon and is located at an approximate distance from X

from A to B of the IUs issued by the source in the interval [0,40] s, also graphically representing with the correct scale ratios: (i) the flow of IUs issued by A (

In the assigned linear network, represented in Figure E2.3, it is first of all necessary to characterize the source A, starting from the known data. The duration of the inactivity interval

of the source is calculated starting from the amount of bytes discarded in each silence period, knowing the source peak rate

We can thus calculate the duration of the activity interval

, using the definition of the burstiness factor

The amount of data contained in each burst (

in node X and the propagation time

along the link X-B are obtained

The time diagram of IU transmissions and receptions is shown in Figure E2.4. This allows us to derive the total time taken to transfer the three IUs issued in the interval [0,40] s by means of the expression 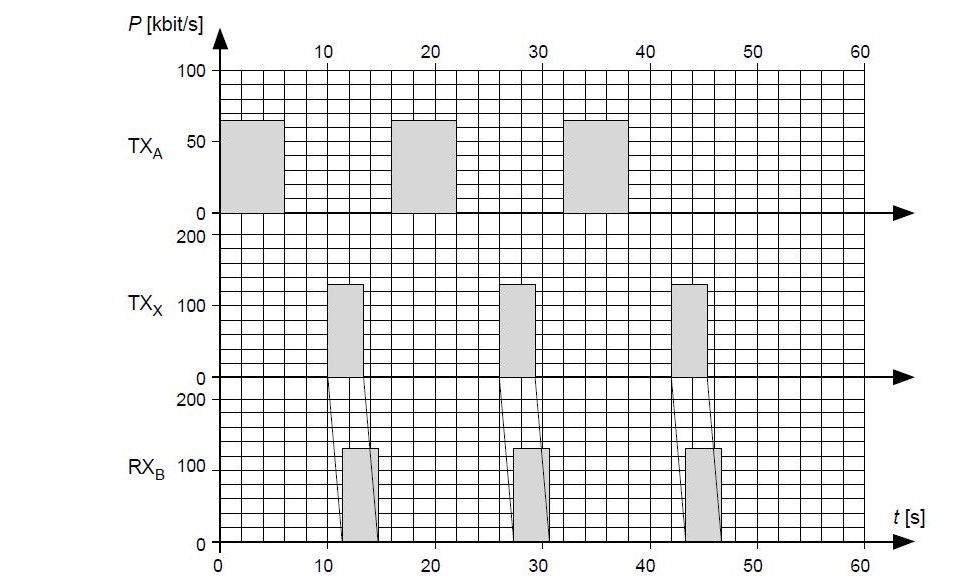 Figure E2.4 Time diagram of transmission/reception according to Exercise 2.11.


Exercise 2.15.
Two terminal stations A and B are connected by a link crossing two packet-switched nodes X and Z with the following numerical values:
• capacity of the two access links A-X and Z-B,

,
• capacity of the internode link X-Z,

,
• length of the internode link X-Z,

,
• signal propagation speed on all connections,

Assuming an infinite storage capacity in the nodes, calculate the total end-to-end delay

required for the transmission from A to B of a 10,000-byte data unit which is broken into two packets of equal length with a packet header

(no other data units cross the nodes X and Z).

Each of the two packets is characterized by a payload

the transmission times of each packet on the wired access line and internode link (given the value of the propagation speed), with

the respective propagation times, then the numerical values of the delays that arise are:

The two packets are transmitted seamlessly from station A (see Figure E2.5). Each of these, once received, is retransmitted after a processing time

used for reception, since

. As in any transmission of multiple data units in packet-switched networks from a source to a destination, the transmission, propagation and processing times required by the different units are partially overlapped as they affect different network elements (nodes and/or links). Note that, since the processing time

is constant, there is no queuing in node X being

indicates not only the reception time of the first packet in node X but also the time that elapses between the transmission start of the two packets in node X and between their reception end in node Z. Since also the processing time

is constant, there is no queuing even in node Z since the first packet requires a transmission time

. The evaluation of the total delay therefore requires paying attention to the time globally required for the transmission and complete reception of the first data unit; the times required to receive all the other units at the destination are finally added. This gives rise to the following expression

Alternatively, we can evaluate the time required for the source to transmit all units except the last. The times required for the complete transfer of the last data unit are added, resulting in the following expression, which naturally equals the previous one

So the total delay is given by 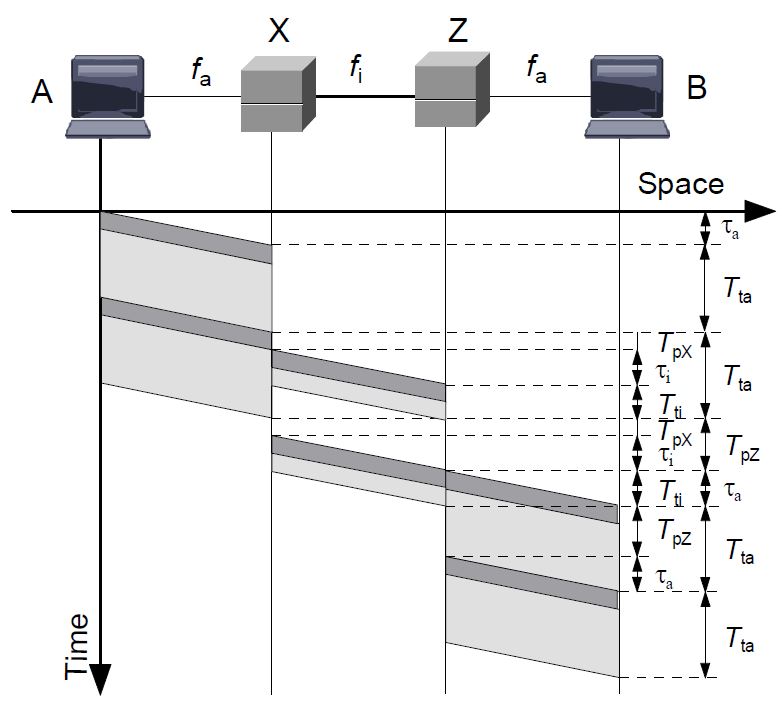 
Exercise 2.17.
Determine the symbolic expression analogous to Equation 2.6 which provides the total time required to transmit and receive (completely) a sequence of N packets of equal length from a source S to a destination D along a path that crosses H nodes,

. All nodes are characterized by the same parameters

(transmission time of a packet),

(processing time of a packet), and all the links are characterized by the same delay

. The nodes are assumed to have infinite storage capacity and no other data units pass through the nodes.

The total delay is determined by the time required for transmission from the source of all data units except the last, plus the transmission and propagation time on the links used by the last unit and the processing time in the nodes crossed. So this delay is given by

Exercise 2.20.
Consider a cascade of 3 packet switched nodes, A, B, C, connected by cable and characterized by the following parameters on the respective outgoing connections:

. Assuming that node B starts to retransmit a packet immediately after receiving it completely and that its processing time is zero, calculate the overall delay for the transmission of 3 packets from A to C.

Considering that the cable connections determine a signal propagation speed

, the transmission and propagation times along the two outgoing connections from nodes A and B are given by

Node A issues packets at rate

, which corresponds to a time between the transmission start events of consecutive packets given by

. Figure E2.6 shows the sequence of reception, transmission and propagation times seen by the different nodes A, B and C. So the overall delay for the transmission from A to C of three packets is given by 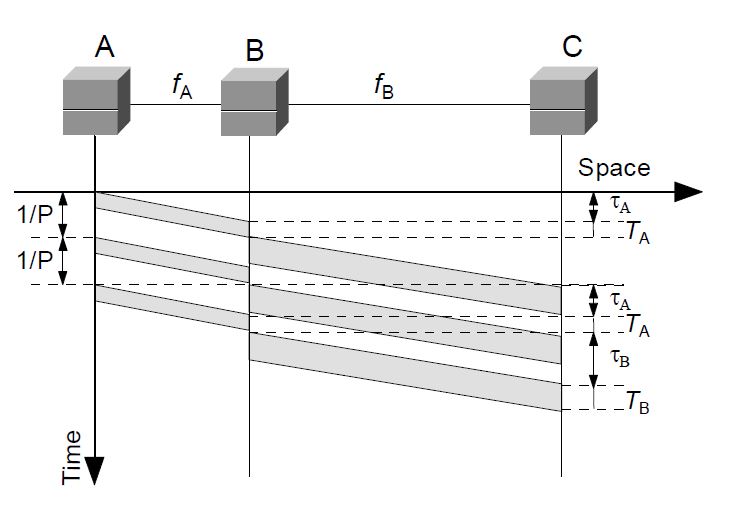 
Exercise 2.26.
Consider a packet switched network topology with 6 nodes (A, B, C, D, E, F) and 7 edges (AB, B-C, C-D, D-E, F-A, B-E, C-F) with virtual circuit service where the following virtual connections are active:
1 H-A-B-C-H
2 H-A-B-C-D-H
3 H-F-C-D-H
4 H-E-B-C-D-H
5 H-D-C-B-A-H
6 H-E-B-A-H
Fill in the forwarding tables of the nodes assuming that:
• the connections have been established in the order of the list,
• the logical channel identifier has 2 bits available,
• the logical channel identifier assigned by each node/host is the smallest available. 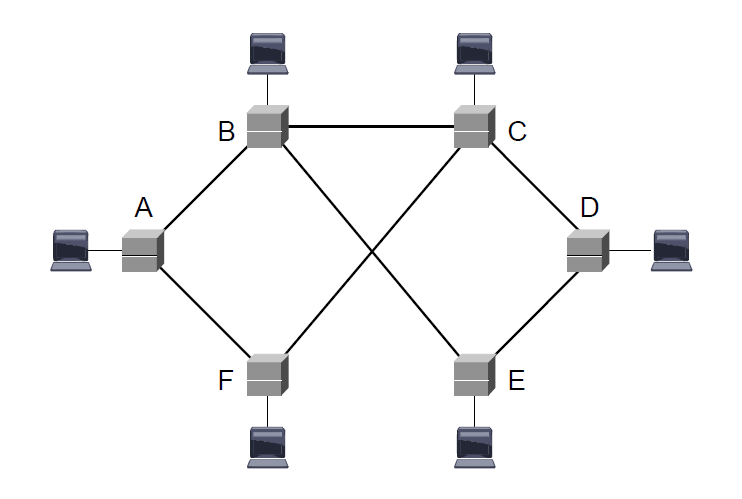 which include 36 traffic time slots each, each with capacity of n bits, and an alignment time slot whose capacity is half of that available in a traffic slot. Determine the frame length

available in each traffic time slot.

The frame length is easily derived from the assigned data, that is

Considering that the alignment time slot includes half the bits of a traffic time slot, then the length n in bits of a time slot is given by

. So the capacity of each tributary is

This website uses cookies to improve your experience while you navigate through the website. Out of these, the cookies that are categorized as necessary are stored on your browser as they are essential for the working of basic functionalities of the website. We also use third-party cookies that help us analyze and understand how you use this website. These cookies will be stored in your browser only with your consent. You also have the option to opt-out of these cookies. But opting out of some of these cookies may affect your browsing experience.
Necessario Sempre abilitato

Any cookies that may not be particularly necessary for the website to function and is used specifically to collect user personal data via analytics, ads, other embedded contents are termed as non-necessary cookies. It is mandatory to procure user consent prior to running these cookies on your website.